ABC Radio National’s Robyn Williams visited Kahawa Estate to find out about the benefits of biochar and why Australian coffee tastes so good. 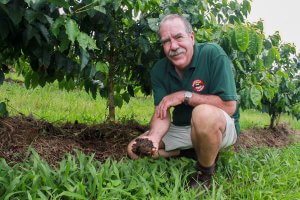 Adding charcoal to soil regularly over a long period has been shown to radically improve soil and its ability to support crops. Organic carbon in soils is lost as forests are replaced by crops. Gradually over time, the soils decline. Adding biochar is a remedy.

It’s a method that has been employed by some Aboriginal and South American cultures for centuries. In South America people created charcoal and added it to soil, deliberately, knowing that it enriched soil.