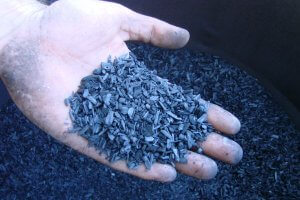 Biochar made from chicken litter ready for spreading around the coffee seedlings (Photo: Elysse Morgan)

Biochar is being trialed on eight North Coast crops, to test its efficiency as a fertiliser and carbon sponge.

Tony Walker from Richmond Landcare, which is funding the experiment with Caring for Country funds, says biochar is a perfect whole of chain solution to fertilising, waste removal and treatment and energy production.

“Biochar is basically charcoal that is manufactured from various ingredients under controlled conditions so that it is starved of oxygen and that process is called pyrolysis.”

“The big plus plus about biochar is that it is manufactured out of garbage, out of garden waste or woodchips or something like that and what we are hoping to do in the Northern Rivers (of New South Wales) is have a plant built to have this pyrolysis done where the councils in the area bring all their green waste in and it will be processed here.

He says that with the right technology the product can even create clean energy to be fed back into the grid.

“After it is processed it’s sold as biochar, but during the process methane gas and other gases are given off but they are not given off into the atmosphere as happens in normal charcoal manufacture they are actually entrapped and they are used to feed back to heat the pyrolysis process.

“Additional gases that are given up that are not necessary to the heating are then fed into a generating system that is then fed back into the electricity grid.”

Mr Walker says the trials have so far been very successful, particularly for the corn.

“You could visually see the difference, it was like a stepping stone the product that didn’t have anything put on it was very small, the product with conventional fertiliser was reasonably tall and the product with biochar was extremely tall.”

Mr Walker hopes that the series of experiments will prove that biochar is a proven product in creating carbon in the soil and retaining it there. 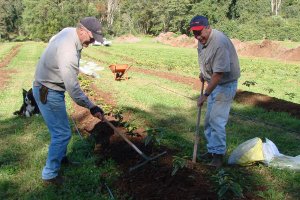 Jos Webber from Kahawa Estate coffee plantation has volunteered his new seedlings for the experiment.

He became involved because he is looking to move towards more natural farm products.

“I guess I have been concerned about the rising price of fertilisers and I’ve also developed an interest in a more biological approach to farming and that combined with my interest in micro – biology when I saw this opportunity I got on board.

“Here is a good opportunity to try something new and it could benefit the coffee industry as a whole.”

Coffee is a crop which demands a high input of nutrients and so growers are keen to find a cheaper alternative to the conventional products currently available.

Made from a range of different products ranging from chicken manure to rice husks they all differ in composition and the amount of nutrients they can offer the soil.

Josh Rust is a scientist at the Department of Primary Industries in Wollongbar and is working on the biochar project. 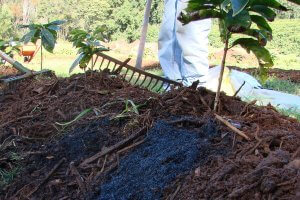 After being applied to the coffee plants, the biochar is mixed in with compost. (Photo: Elysse Morgan)

He says not only are biochar experiments looking at how beneficial the biochar is, but how they measure up against each other.

And while rice husk char doesn’t contribute as much nutrients to the soil as biochar made from chicken manure for example, it plays another critical role.

The results for the coffee plantation trial will not be known until 2011.

Biochar is being trialed on eight North Coast crops, to test its efficiency as a fertiliser and carbon sponge. The trials for coffee are being conducted at Kahawa Estate.