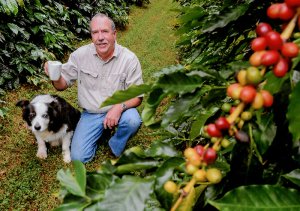 Results for the 2011 Sydney Royal Fine Food Show Coffee Competition were announced last week with coffee producers from the Northern Rivers gaining three awards for their coffee. The coffee competition attracts nearly 300 entries of some of the world’s best coffees and is one of Australia’s most prestigious coffee judging events.

First time entrants Jos and Wendy Webber were thrilled to be awarded a silver medal, in the ‘Plunger – 100% Single Origin’ class for their Kahawa Estate ‘Lava’ coffee.

“The volcanic soil and southerly altitude conditions near Byron Bay mimic that of high altitude coffee,” he said.

Mr Webber attributes the increase in demand largely to the emerging demographic of young coffee lovers who have graduated from the sweet, milky chain store style brews.

Mr Webber offered this encouragement to newcomers to the North Coast boutique coffee industry: “The problem is there is far more demand for our coffee than there is supply.”